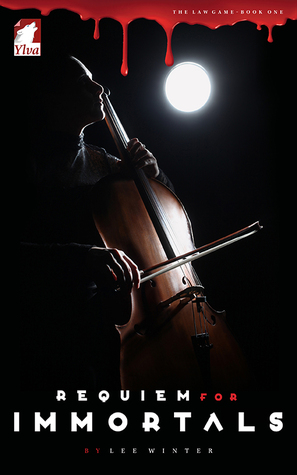 Have you read Lee Winter’s “Requiem For Immortals?” If not, why not? What can I say about this book except….it’s only BLOODY MARVELLOUS, that’s what! It’s prolly one of the best stories I’ve read thusfar because the plot is so uniquely original,  it’s a dark, intense, cat-and-mouse romance, action-thriller masterpiece.

A brilliant cellist by day, ruthless, lethal assassin by night. And a lesbian at that, too! Playing cat-n-mouse with a copper! Sparks fly! Who doesn’t love that, eh? It’s a compelling, fun page-turner. One of me favourites, obviously because….Lee Winter, one of me favourite authors! 😃

I was absolutely enthralled by the cat-and-mouse game between Natalya & Alison. Natalya aka Requiem, grew up being groomed as a cold, heartless assassin, bound by her duty. She couldn’t believe she was developing real feelings for her mark, even when it was staring right in front of her! It was all so new to her – these mushy feelings! The more she tried to ignore it, the more she was drawn to Alison. I adored Alison. She was so down-to-earth, unassuming, timid, seemingly passive. So much so that Natalya nicknamed her Mouse! And then…..BAMMM!!! Whoa! BLOODY BRILLIANT!!!! Suddenly Natalya was taken off-guard! Alison truly gave her a run for her money. FCK YEH!!! What a kick-arse pair!!! They are one of my all-time favourite couples!! 💕😍

Another gift I received from this incredible book was the hauntingly beautiful, deeply serenading sounds of the cello every time Natalya was depicted as playing it. Music was her only drug, refuge, her inner-sanctum, the only way she could fully express herself when words were absent. Her cello was her emotional protector; the music flowing out of her through the bowing of those dramatic strings was her language, her speech. Coincidentally, Alison also played….the 🎻 ! I was literally jumping with joy out of sheer excitement in discovering that both of these amazingly complex women who I ❤️ played music – string instruments!! FCK YEH! The music was so deftly described in richly emotional & absorbing words I could literally hear it as I was reading it. Utterly SUBLIME. That. Is. All.

Oh, the chemistry between Natalya & Alison was undeniably, heart-stoppingly HOT! SIZZLING! Phew! Their romance was seductive. Their movements were like a dance. Very cat-like. The push. The pull. It was all very addictive I was utterly mesmerised. Bewitched. I wanted more.

The action, the thriller, the cat-and-mouse game – THRILLS!!!! Requiem’s cool, lethal hand-to-hand combat moves were nothing short of mesmerising!! FAN-BLOODY-TASTIC!

I can go on and on about this but I’ll let you read and judge for yourselves.. This is simply a MUST-READ. I can’t recommend it enthusiastically enough!

AND – after this book, you simply MUST read it’s mini-sequel, “Love Is Not Nothing,“ especially if you wanna find out more about Natalya & Alison after “Requiem” and why the sequel has that title. 😉

Get your copy here: