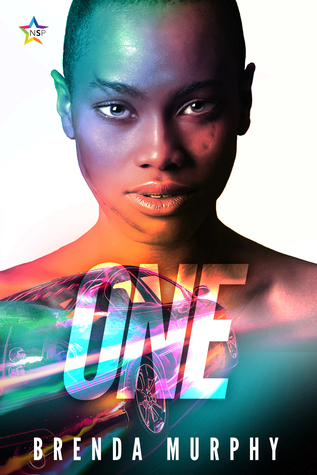 This book was a great find! I’m glad I was introduced to this remarkable author, Brenda Murphy, whom I never known until recently. She’s now one of my newfound favourite lesfic authors which means I won’t miss her work – past and future! 👍✌️ “One” has fast become one of my favourites lesfic romance novels. It’s so different than the other favourite romance lesfic of mine. This book has to be read and experienced to really understand what I mean by different.

I love Murphy’s writing style and storytelling since reading “Sum Of The Whole” right before picking up “One” – how she weaves her story and unique characters, the dialogue, especially the internal monologue truly resonate on an emotional level. But “One,” I felt like Murphy took her writing and storytelling to another level with one of the most compelling stories & characters I’ve read in lesfic romance! First off, the 2 main characters are just the kind of lesbians I love reading about! Mac, an ex-soldier, mechanic, biker, race car enthusiast. And Lana, a super smart, 100% BAD-ARSE NERD of an engineer! A bloody race car engine designer! I mean, FFS!! 🤩😍 Not only that but she was also obviously into fast cars, and bikes, which she drove and rode, respectively, with the same proficiency as her genius brain!! AND, bloody hell, she was also a grease monkey!!! Well, not in a job sense but a hobby and form of therapy sense. 😏 SO COOL! **I’ve never read of a character who’s not only a genius nerd but genius with tools, too! Until Lana. Well done, Murphy! Cheers!**

Of course people like Lana are real!! It’s just not written much in lesfic because I reckon that ruins the stereotype of butch vs femme characteristics. 🤷🏻‍♀️ I must add, Mac & Lana do not cater to the conventional butch-femme stereotype. Both possess either characteristics at different times. In other words, the dominant/submissive line was blurred. They were equals, they balanced each other. So incredibly refreshing to read! Hence, I applaud you, Ms. Murphy! Thank you for going against convention!

The chemistry between Mac & Lana was there from the beginning. A chance meeting at the airport under interesting circumstances, slowly but surely building up to a friendship as they realised they shared similar love for car-racing, fast cars! As they spent more time together, Lana being from Italy and involved in the car race that Mac was planning to attend, and Mac even though she was only in Italy for a holiday, their undeniable connection and attraction toward each other drew them together closer each day they were together. Murphy’s incredible talent in writing absolutely compelling dialogue that was inundated with brutally honest emotions uttered between Lana and Mac as they grew more attached and ultimately falling in love with each other, so intoxicating and realistic to experience.

I can’t say enough about just how deeply resonating the Mac and Lana’s dialogue was. Mac, being of mixed race (she’s black Irish), Lana being from a very wealthy family and an incredibly established career, inevitably invited racism and prejudice amongst people around them, including Lana’s family members and friends. Lana’s reaction toward these matters and Mac’s resigned attitude toward them were written with such ferocious honesty I was yearning for the resolution and their ultimate happiness for their own’s sake! Mac’s constant insecurities about how Lana actually felt about her was met with Lana’s equally determination to make Mac see and believe that what they both shared were genuine, real, and enduring. Lana was utterly strong and protective when Mac needed it and vice versa. That really made this couple so powerfully captivating because they simply complement each other’s strengths and weaknesses. How Lana and Mac interacted with each other was so realistic that I felt like these were real people, their story happening in real-time and I was along for the ride!

The most unforgettable scene for me was when Lana had to chase after Mac…. literally racing after Mac at high speed….in a bloody Ducati!! 😲 How bloody bad-arse was she!!! FCK YEH!! 🙌

I especially LOVED Mac’s internal monologue! So acutely raw and honest I could literally feel Mac’s vulnerability, her angst, her dilemma, her struggle, when dealing with her own emotions and state of mind, particularly how she felt about Lana. So palpable, so real. It’s like I was in Mac’s head! Murphy’s style of writing Mac’s internal monologue was spot on, in my opinion, because it actually elevated my understanding of Mac’s struggle to come to terms with how she really felt about Lana, her insecurities about her worth (financial status and personal baggage) when it came to being with Lana. I simply reveled in its natural openness. It was so emotionally compelling that I wish Murphy had included Lana’s internal monologue as well. 😅 Lana’s one of the most intriguing characters I’ve read in lesfic for me! I yearned for more of her! 😍

Apart from Lana and Mac’s utterly moving love story, I thoroughly enjoyed reading about Lana’s family drama, her brothers, her father, their business, how she had to constantly prove herself as a genius, proficient engineer, an engine designer of race cars, no less, so she could be taken seriously because unfortunately her expertise was in a male-dominated arena. I loved that Murphy included the details of the race car circuit, the protocols, technicalities, how Lana was immersed in it ever so instinctively like she was born to be in it. I loved discovering Mac’s past with her dad, her nan. Mac’s own demons from her last tour in the military, her physical and mental scars which she was struggling with, how Lana became her anchor and support, were written with such open honesty, emotional depth and incredible poise, the intensity of their journey toward their deep connection and undeniable love for each other was a captivating experience to read!

All in all, I absolutely fell in love with Lana and Mac’s complex and intricate journey toward an everlasting love. It was emotionally resonating, and a mesmerising love story to cherish! Lana/Mac have become one of me favourite lesfic couples. I will be re-reading their story time and time again, that’s for sure!

Icing on the cake? The book COVER! Absolutely LOVE the cover!! So ADEQUATE! So PERFECT! Totally ACCURATE! Utterly BEAUTIFUL!! 😍😍❤️❤️

Get your copy here: