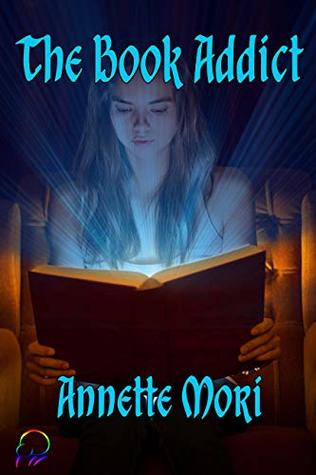 Annette Mori‘s latest, “The Book Addict,” was me first book of hers that I read, thanks to the author herself who sent me a complimentary copy! And I must also thank Rachael Byrne (Lesbian Fiction Group by Les Reveur) for picking me to win some e-books from some lovely authors!

Not having had any experience with Mori’s writing previously, I was curious to discover her writing style and storytelling tone. And what better way to find out than to read her latest creation, eh? I was glad “The Book Addict” was me first Mori reading material because it’s about something I’ve always loved all me life – BOOKS! Only this time, it’s ENCHANTING books! Blimey!! I couldn’t wait to read it! Love me some creative stories!

Needless to say, “The Book Addict” was a delightfully fun and quick read. All I can say is, when I ventured into the first chapters, me mind immediately went to one of me all-time favourite childhood movies, “The Neverending Story,” and most recently, “Jumanji“!! Yup, I’m sure you know what I’m getting at with the mention of these two films, eh? To make it even clearer, remember how Harry Potter got zapped into the diary of Tom Riddle in “Harry Potter and the Chamber of Secrets?” Well… that’s EXACTLY what Mori’s “The Book Addict” was! I was thrilled about what to expect upon that realisation! As a child who loved living in her own world inside her head and a bookworm since 4, I’ve always found meself immersed inside every book I was reading that captured me attention. I would be experiencing the characters’ journeys, but purely as an observer rather than a participant. So, to read about Tanya, who was like me, an avid reader, except, rather than being an observer, she was a participant, living vicariously through the characters and stories she was reading about, was refreshingly intriguing!

Tanya had been a book addict ever since she was introduced to all the books imaginable by her father. She even named her cat after one of the greatest authors of all time, Tolstov! I liked her character – apart from being an avid reader, she was a total nerd, socially awkward, but always dreamed of finding love with a real-life person instead of just living through the characters in the books she’d been reading, particularly lesbian fiction. In came Elle, the mysterious owner of a new bookstore that just opened near Tanya’s home, whom she stumbled upon on her first visit to the store. Little did she know, Elle was going to change her life forever! Yup, by turning what she always did whilst reading into a reality! Instead of dreaming and fantasising about being the characters of her books, she was going to actually be physically transported into the selected (“enchanted“) ones as one of the featured characters, experiencing the adventures and excitement, even including finding love, for real, thanks to Elle’s speciality in matchmaking! Let’s just say, Mori put the phrase, “bringing characters to life,” into a whole new perspective when it came to what Elle and her magic!

Yes, Elle had magic powers. She was a book magician. She and her family were from the magical world. The setup was reminiscent of Harry Potter’s world of wizards and witches. Only, in this book, people like Elle, were called magicians living in the world of magic parallel to the non-magic, human world. I really enjoyed Mori’s ever-so slyly subversive depiction of the state of power, patriarchy, misogyny, gender politics in the magical world, unwittingly pointing to what’s happening in America today. I absolutely loved it! Well done, Mori!

Obviously, Tanya developed a crush on Elle ever since their first meeting in Elle’s bookstore. I enjoyed Mori’s deft description of their awkward exchanges that were at times flirty and funny but oh-so adorable, especially when initially, Elle was clueless about Tanya’s not-so-subtle girl-crush, because she was too busy doing her job (well, you simply have to read it to know exactly what Elle’s job was!)! Slowly but surely their friendship became more comfortable and at ease as time went by, as Elle, much to her own chagrin, couldn’t help being attracted to Tanya as well. Why Elle was reluctant to acknowledge her feelings was very interesting to discover as you will when you read this book. I enjoyed how Mori shaped their growing feelings for each other. Their get-togethers in and out of reality were fun, delightfully sexy and endearing! Their relationship was organically developed and their chemistry just grew naturally as they got closer, and the more Tanya was involved in Elle’s world. I liked the secondary characters, specifically Elle’s mum and aunt, who were interesting additions to Elle and Tanya’s journey as they provided the reader a better understanding about Elle’s character.

Not gonna elaborate on what exactly was going on in the magical world because it’s best to be explored directly by the reader, but obviously, dangerous adventures ensued because of the threat that Elle and the other female magicians posed to the status quo system of patriarchy. The villain and his “evil” plan that Mori created in this story very much represented what’s been going on with the social and political climate in America – the growing erosion of women’s rights. The will to fight for what was right and just, changing the landscape of gender equality and empowerment were all evidenced in how Mori portrayed and depicted the journey of Tanya, Elle and the rest of the female magicians (plus some male feminists!) throughout the book. Needless to say, the dangerous adventure that Tanya and Elle found themselves in as they fought to right the wrongs was thrilling to read!

All in all, “The Book Addict” was a mystical, magical, mythical, an enchanted journey to ride along with, filled with funny moments, thrills and excitement. It had some Harry Potter elements in it especially pertaining to Mori’s magical world. If you enjoy immersing yourselves in the world of magic and enchantments, spells and charms, with a touch of romance and an all-around, fun, feel-good reading experience, look no further because this book ticks all the boxes!

Better still, at the end of the book, Mori ever-so subtly provided a sneak preview of what to expect in the next installment of Tanya and Elle’s adventure, “The Book Witch!” One word: IMARA. Yes, after catching a glimpse of what’s to come, I’m psyched to find out more about this deliciously sly book witch character whom I have a good feeling is gonna give poor Elle a run for her own money when it comes to charming the socks off attractive women (including Tanya!), AND the amount of mischief she’ll be in when she, Tanya and Elle embark onto another journey, this time helping Imara secure her own chosen “book addict“!! AND….this apparent “feud” between Elle and Imara, essentially book magicians vs book witches, will be quite enthralling to explore…for me, that is!

Simply can’t wait for the sequel now! Thanks, Ms. Mori, for keeping me interest and excitement about the next adventure alive and well!! Book magicians and book witches, not to mention, book addicts! When it comes to books, there’s no better enjoyment and excitement than reading and exploring them in an “enchanted” way that brings characters into life, is there?

“The Book Addict” was a bloody good read, so what are you waiting for, eh?