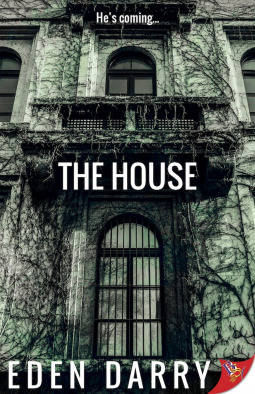 Just look at the cover! Aesthetically sinister, innit? OK, I saw this cover recently, tried to stay away despite being instantly drawn to it because my current reads were overloaded already and I really needed to finish them first before I went mad with panic for not clearing the queue in a timely manner! I know…oddball nutter I am! But then the image of the ominous-looking, totally mesmerising house, photographed in a chilling, intimidating angle with that menacing ivy wrapped around it, kept resurfacing in my peripheral vision which eventually got the better of me. I couldn’t deny its disquieting allure anymore. The house was beckoning me!! Crikey! Yes, as soon as I found a tiny little space in-between books in my reading schedule, I managed to squeeze this in with a quick read (not having heard of the author before be damned!). Was I glad I did because, Eden Darry‘s “The House,” her full-length debut effort, I might add, satisfied most of my required ingredients in a properly written, plotted and constructed story, not just in the paranormal/horror genre in fiction but specifically in lesfic, with a compelling and captivating plot that also combined a couple of goodies to enrich the main ghost/paranormal plot – corporeal evil and clairvoyance! So, the story’s also crafted within the realm of the psychological thriller genre, too, cleverly serving as a backdrop to it main ghost/paranormal flavour.

As expected, the “look” of the house on the cover lived up to its implication as Darry introduced me to it when the two MCs along with their two kids had to move from the comfort of their house in the city to THE house in the outskirts, ala the countryside, to escape the horrors that happened to Sadie. Darry certainly didn’t mess about when she constructed that whole scenario involving Fin, Sadie, the other prospective buyers and the estate agent of the house early on in the book that ended with my hairs standing up on the back of my neck! Yup, that tingle that I always crave for when reading books of this genre? Well, Darry went and did it…with a subtle chill. I thoroughly enjoyed it! Bloody well done!

I’m always very appreciative when authors provide me with more than one POV. So, when I continued with the book, I was given multiple POVs, including one from Liam, Sadie and Fin’s quiet, introverted son! I was actually surprised because I never read a POV from a little kid before! I was pleased that Darry provided an accurate depiction of someone like Liam, a clairvoyant-type with premonitions in the guise of nightmares with the appropriate physiological effects, his inner psyche in dealing with what he couldn’t comprehend. His development captivated me. Lucy, his four-year-old little sister, was a polar opposite of him. She was a rascal, chatty and a total extrovert. So it was no surprise that something happened to her instead of Liam. Let’s just say, that “something” was reminiscent of “The Conjuring.” Yup. I loved every bit of Darry’s description of its development! Kids honestly – the best tool in horror/paranormal-ghost stories, because we all know that when we were kids, our imagination, sense of boundaries, fearlessness and adventure, and our minds were wide open, ready to receive anything like sponges. No socio-economic factors, pop culture, religion, certainly not enough life experience just yet that would influence the mind just yet, unlike adults. So, everything the kid experiences is raw, honest and unfiltered.

Apart from “The Conjuring” reference, the entire family of four, with Fin’s mysterious affinity toward the house and its surroundings (energy, feel) and her growing emotional, psychological and physical attachment to the ins and outs of the house’s past reminded me very much of “The Amityville Horror.” Read it for yourself and feel that cold, eerie and menacing effects. I loved the resemblance and the juxtaposition of how Darry portrayed Fin, her relationship with Sadie, and each of their kids, with differing emotional approaches, not to mention, I preferred this one because….lesbians! Obvs! Speaking of, I enjoyed the family dynamic. Darry’s portrayal of Fin and Sadie as a long-term married couple, both of them with different approaches to each of their two kids was grounded in authenticity. I believed them to be a family. The subtle rich girl/poor girl psychological effects as observed in the contentious relationship between Fin and Sadie’s father, Fin’s sense of inferiority, her overall insecurities about providing for her family, taking care of them, etc., were deftly depicted with convincing results, especially when things went south, the whole feeling of inadequacy concerning such a sensitive issue eventually burst its way out in bouts of anger, accusation and hurtful remarks, affecting their relationship. That whole scenario which Darry meticulously built up throughout every stage the story, was described with brutal honesty and uneasy reality. I was impressed that in the midst of creating a sinister ghost-paranormal/horror story, Darry was able to weave the interpersonal, psychological and emotional journey of Fin and Sadie, with their kids and their mates. Speaking of their mates, I liked Fin’s bestie, Rose, and her relationship with not just Fin but also Sadie which was depicted with genuine effect. Sadie’s bestie, on the other hand, was totally antagonistic but utterly necessary, which I appreciated.

As mentioned, Darry not only created a horror story in a paranormal/ghostly sense, she also added the psychological thriller subplot, too, which involved a very human with corporeal evil sensitivities, who was the reason Fin and Sadie moved their family to the house in the first place. You’ll discover the source and implications of this incident when you read the book, which Darry deftly portrayed. Malevolent evil lurking around them all throughout their new settlement, with frightening incidents including Liam’s ever-fascinating premonitions via his vivid night terrors, not to mention, the very human monster gaining ground on the family as well. Sadie’s PTSD only amplified the state of terror within the confines of the house, as Darry methodically laid out as Fin tried to placate Sadie’s fears, be it psychological or tangible, with affecting resonance. Imagine having all the emotional and psychological stress stemming from a horrible trauma and then experiencing some unexplained phenomena where you don’t know if you’re imagining it or it’s really happening to you and around you. And your spouse just stares blankly at you like you’re mad or worse! As a result, that tensed, emotional atmosphere effectively turned up horror-related stress up a notch, which Darry described with aplomb. In essence, Fin, Sadie and the kids had to contend with the spiritual/ghostly vs corporeal malevolence around the house. In the end, which entity is more frightening? For me, the scariest, most venomous “monster under the bed” in the universe is the human species. Yup. Darry’s depicted human monster, Lance, was the very epitome of evil reincarnate.

Darry’s approach in telling the ghost horror story, parallel to the human horror one, was very effective in increasing the intensity and thrill of the danger because as both descended steadily into deteriorating decay, everything seemed to intertwined in very dark and sinister ways, which you need to read it to experience that sense of desperation, helplessness and impotence as Fin and Sadie’s states of mind and perspective regarding their family, their relationship and their entire world slowly warped into something unrecognisable. The tension around the family, the house, especially Fin and Sadie’s increasingly destructive relationship was physically and emotionally palpable! I was utterly enthralled, totally captivated by these two compelling characters and the utterly addictive story! As the intensity of the terror and thrills reached fever pitch, all bets were off in the final act where everyone’s lives hanged in the balance with utterly galvanising thrill of a sequence that’ll leave you with a big sigh of relief in the aftermath! I was utterly gratified by Darry’s delightful epilogue! Phew!

All in all, I really enjoyed this paranormal/horror story. I’m a big fan of this genre, but also very particular about the level of horror/paranormal feel of a written story in fiction (yeh, I have the tendency to use Shirley Jackson and Henry James’ classic ghost/paranormal-horror stories as the baseline to determine each story’s quality and chill factor). I was utterly delighted to discover (at least from this book), that Darry’s writing style, her written expressions and storytelling approach are just my cuppa tea! This story gave me all the necessary ingredients I look for in the paranormal/ghost-horror genre specifically in lesbian fiction – the chills, the tingle, the twists, the richness quality of the story, and defo the chemistry amongst the characters, primarily between the two lesbian/queer main characters. Darry’s on my reading radar now when it comes to well-written and crafted stories that capture my love for this particular genre, which are painfully few and far between in lesfic, thusfar. Hence, I will be on the look out for her next project especially if it’s from the same genre again.

I highly recommend this story to all fans of the paranormal/horror AND psychological thriller genres in lesfic! A truly solid debut effort! Well done, Ms. Darry, and thank you for writing this captivating paranormal/ghost-horror story with a dark thriller mix, in fully enriched lesbian flavour!