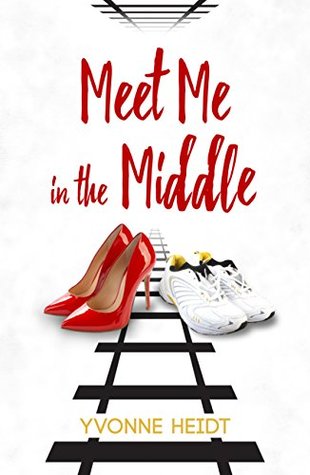 Having been one of my favourite paranormal lesfic authors, obviously I’ve read all of Yvonne Heidt‘s books, to date, including this 2017 outing, “Meet Me In The Middle.” My primary draw to Heidt’s books is because of her brilliant writing and narrative style of telling a paranormal story with a nod to her own abilities, which, for me, gives it a more personal, evocative feel when I read it. Doesn’t change even when I re-read her books. Which brings me to “Meet Me In The Middle,” that surprised me when I initially read it because Heidt took a decidedly different route. Yup, she shifted gears and crafted a romantic comedy! Not just any romantic comedy, mind, but one with a cheekily adorable twist, a quirky cast of characters, enriched with emotively written bittersweet moments that evoked deep introspective feels as Heidt manoeuvred the subject of grief. As I read those moments, I couldn’t help feeling that it had a touch of personal realism to it. A conjecture, obvs, but I did feel it, thus, making those moments even more resonating to me. Perhaps there was a reason that my reread occurred at this particular point in time. Oh well… prolly just me! Ignore.

Since I’d read this a year ago (and having been reading so many books since then), I couldn’t remember anything about it other than the fact that I’d enjoyed it immensely. So re-reading it not only gave me a good refresher and helped jog my memory about the plot, to my utter delight, it read even better the second time around! I’m glad I read this again!

When I read the opening of the first chapter, I’d forgotten how much I was intrigued by it because it was described like a dreamy sequence, with snapshots of scenes that were disjointed and abstract. But then the short portion of the chapter ended with a surprise! Let’s call it an ethereal exit, shall we? Uniquely wonderful, it was, which I believe was the kicker that sucked me into the rest of the chapter and the story, altogether, finishing it swiftly the first time around! Obviously, the second time was the same. Quick read!

It’s been a while since I last read Heidt’s books. Yup, the last one being “Paradigm.” So I’d forgotten just how funny Heidt is! This story was a quirky, funny, hilarious rich girl/poor girl, enemies-to-lovers romantic comedy. In addition, there was also a big family in the mix. The humour that Heidt injected into the conversational dialogues amongst the characters, not to mention, some laugh-out-loud hilarious slapstick scenarios, too, was reminiscent to Robin Alexander’s. Although I’m a huge fan of Alexander’s but when I read this book the first time, for some reason I didn’t make that comparison but on the second time, the memory of Alexander’s humour style came a-knocking as I chuckled through Heidt’s hilariously written scenes in this story! Funny how our mind works at different points of our lives, eh?

I loved the introduction of Aislin, the primary MC, which immediately put her in an outrageously funny scene from the moment she stepped out of “The Beast!” Aislin was a vet. A hilariously clumsy, accident-prone, utterly absent-minded character with ADHD-like attention span, to boot! I liked her quirky persona! She also suffered from a serious case of social anxiety stemming from the remaining PTSD symptoms that still plagued her even after more than three years. Rather than revealing everything about Aislin’s past or back story, I was delighted that the revelations occurred layer by layer in conjunction with each progressing stage of her character development and growth. This gave Aislin’s character a multi-dimensional depth. The same goes for Zane, the other MC. She, like Aislin, was also going through a rough patch that affected her worldview and outlook about being emotionally involved with people and relationships. In essence, neither characters were looking for love, let alone relationship! Coincidentally, one of Aislin’s many sisters worked as a caterer for Zane’s family, something that Aislin would sometimes help out, making her also an employee of Zane’s family. A touch of “Upstairs Downstairs,” eh? Yup, rich girl/poor girl. Besides, they weren’t each other’s type, either, let alone their jarring class differences! So what did it matter, anyway, right? Well…

First off, I loved Zane. On the surface, she was this hard-arse blue blood snob with strings of supermodel-type dalliances that she never cared about and a typical superficial vanity that somehow had stuck with her. But underneath all that frivolous façade, Zane was a broken soul, emotionally vulnerable and devastatingly lonely. But her fear of having her heart and soul broken again had effectively stopped her from even thinking about finding love. But then, to her chagrin, the moment she laid eyes on Aislin, she was hopelessly drawn to her – her striking look, her polar opposite personality to hers and her fiery character. Their first encounter was already riddled with ridic hilarity in the horse barn involving Louis, Zane’s twin brother, Zane’s horse, Blue, whose foal was about to pop out, and poor Aislin! You simply have to read that scene to experience the absolutely riotous dialogue and Zane’s monologue about Aislin! And the hilarity didn’t stop there. This is where you see Heidt’s brilliance in writing comic relief in the verbal interactions and situational occurrences. Which brings me to one of my favourite moments involving Zane! Yup, the outrageously hilarious scene when she popped by Aislin’s vet clinic was…let’s just say, she unwittingly had an “entangled” situation with the dog’s lead that had her seeing stars!! I was chuckling with glee at the perfectly written slapstick! Oh, the embarrassment! Well done, Heidt!

So, we have this constant push-pull between Zane and Aislin before they finally accepted their mutual attraction toward each other. Even so, the road to their eventual union was filled with endless doubts and insecurities, mistrust, misjudgements, more hilarity, especially when Aislin’s family was involved, more misunderstandings and some drama. Now, during this time of Zane’s “courtship” with Aislin, there was something uniquely different than other rom-coms in lesfic. In this story, Heidt approached it quite differently. Not revealing anything so get ready for some insights to the genesis/development of Aislin and Zane’s bumpy journey of romance! Needless to say, I thought this little nugget gave this Rom-Com much more thrills to explore, imo!

Another favourite moment for me was on the dramatic side. Aislin’s clockwork nightmares that always placed her in the same helpless, hopeless, untenable situation. I felt every anguish, uncontrollable sorrow and misery, every emotional torture that Aislin was feeling every time she encountered the same repetitive scene. Heidt’s visual description of the same ill-fated scene, with every emotional expression so vividly detailed, I could feel Aislin’s torment, wanting so much to change the course of event. Her survivor’s guilt was palpable. It’s no wonder she had a hard time accepting anyone else into her heart. Heidt truly personified someone who was submerged in the depths of inconsolable grief and inescapable guilt and couldn’t (or wouldn’t) get out of that torturous bubble in Aislin’s character with such heartwrenching conviction that she felt real. Stirring and harrowing.

I loved how Heidt contrasted everything about Aislin and Zane’s characters, from their socioeconomic status right down to their blood relations! Even their coping mechanisms with respect to their grief were utterly different. Everything that Aislin displayed in her behaviour, attitude, actions was generated from within herself, hence, her impulsion, critical judgement, defeatist and pessimism but would be the first one to lash out in preemptive strikes when her ego was threatened, all from inside out. On the other hand, Zane’s were the complete opposite. Everything was expressed from outside of herself, because she didn’t want to feel, didn’t want to be emotional attached, so everything ended up being merely temporary in her life, at a safe distance from her fragile heart. But they had one thing they shared in common – love. But how could they reconcile all their differences, their baggage, when one of them refused to let go of the past? True and lasting love must have trust. It must be equal. I was gratified by Heidt’s openness and honesty in depicting Aislin’s struggles, her crippling fear of losing herself again whilst still holding tight onto what she’d lost via her dreams, her actions toward Zane. I must say, the dance between Zane and Aislin was frustrating at times but oh-so harshly realistic and necessary to characterise the emotional nuances that flowed between two emotionally broken souls who were desperate to connect but certain decision had to be made so both could move forward into the future together. This was where I thought Heidt truly chose the most relevant title to portray Zane and Aislin’s journey toward each other as one. They had to meet in the middle. That’s how their love could survive.

When their relationship finally arrived at the crossroads, Aislin had to make a decision. A decision that would effectively change her life forever. Her utter dilemma, torn between a lost love and a potential new love was written with resonating effect. I enjoyed the scene when she finally had an epiphany that came with a resolution to her long-suffering guilt. Finally she had closure. I applaud Heidt’s innate grasp in the psychological and emotional complexities of survivor’s guilt at the deepest level which almost always comes down to something simplistic for the sake of closure, which she deftly wrote into richly affecting and heartfelt words that resonated with a bittersweet but soul-freeing effect.

Heidt saved the best for last when Aislin finally let go of her fear of falling in love again, only this time, opening her heart wide to let her love in, with absolutely no conditions, no exceptions, no secrets, no ghost of the past to contend with. Only pure truth and trust. It was time to ask her love, her future, to meet her in the middle. I was captivated by how the scene was described as it was the moment of truth between Aislin and Zane, where masks were finally stripped off, leaving only naked vulnerability, truth, and love, wrapped in an intensely genuine dialogue that was both touching, heartwarming and…..funny at the end! So befitting of how they first met! Opened and ended with comic relief! Brilliant!

All in all, I thoroughly enjoyed taking a wildly funny, quirky, bittersweet but also emotionally contemplative ride with Aislin and Zane as they journeyed through the maze that was finding love when they least expected it, truth and reconciliation of their emotionally devastating past and promise of a future in this well-written and entertainingly told romantic comedy with a touch of something extra that I’m sure fans of romance, comedy, light drama and stuff would appreciate the uniqueness and eccentricity of how Heidt skilfully mixed them into one compelling story that will make you feel the funny, the sad, the aggro, the fear, but ultimately rooting for two characters who truly deserved to love and be loved.

A bloody good read the first time around. An even better, more resonating reread, that’s for sure! Defo recommend it!

2 thoughts on “Meet Me In The Middle”