Having read Telanu’s fanfic of the same title first a while ago and had since been waiting in anticipation for its full publication because, first, “The X Ingredient” was so superbly written and told that when Telanu left me hanging at the end of the fanfic version with a promise of a full publication at a later time, I was beside myself with horror because….well, I really wanted to know what happened in the second act and Telanu spared no mercy with that cliffhanger! That was prolly 2 years ago?

As you know, Telanu is Roslyn Sinclair‘s fanfic pen name – and whilst we’re at it, I HIGHLY recommend you to go get yourself some Telanu reads because they’re simply a cut above, you’ll never realise you’re reading a fanfic piece! Her “Truth & Measure” (DWP)? Truly outstanding, one of my all-time favourite lesfic and I don’t even classify it as a fanfic, really. Top notch quality writing. Ok, ok, I’m sorry. I think I just went off-tangent here! THIS is about Ms. Sinclair’s newest book, “The X Ingredient,” the finished product of its original incomplete fanfic piece, which, technically is not, since Sinclair practically overhauled the entire DWP-inspired setting, basically scrubbing off any trace of it, toned down the level of “explicitness” (you know what I mean!) but just a little bit (no worries!), and reworked it into an office romance in a high-powered law firm with a new premise of the story. END_OF_DOCUMENT_TOKEN_TO_BE_REPLACED 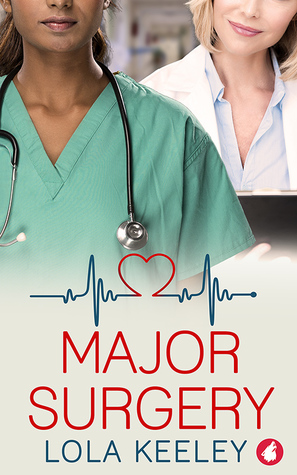 Lola Keeley‘s “Major Surgery” gave me every single thing that I love about medicine! First and foremost, it’s BRITISH!!! Finally!! Someone finally wrote a pure British medical romance with every medical term, jargon, procedure, protocol, every service department used, all called by their British terminology! I literally felt all tingly inside as I explored every page of this book, feeling this sense of, “Ah, I’m on familiar grounds now!” It was like seeing an old friend again after a long absence! So, thank you, Ms. Keeley, for making this happen! I do hope more authors would write British medical romances, though. Oh well, reckon the American medical lingo is more popular (even though most of the world use the British terms! Hey ho.). But, I, for one, am very grateful and appreciative about this book catered to the British health system. And one more thing I must mention about Keeley’s quality of work. Two books in, I can now rest assured that her commitment to doing proper research for her work is tops! The ins and outs of a profession as intricate as ballet in her debut novel and now medicine! And let’s not forget her exceptional writing quality! Brilliant!

Back to Keeley’s story, well, the first page, alone, had my full attention and intrigue with an explosive opening scene involving Dr. Cassie Travers, one of the two main protagonists. Let’s just say that Cassie entered the scene with, not to put too fine a point on it, guns blazing! Talk about a dramatic and intense intro! Almost like a bank hold-up situation with many people surrounding the action! The opening scene, I thought, was brilliantly written and totally effective! Now, THAT’s what I call making a GRAND entrance that made an unforgettable impression! Most of all, that was how Cassie Travers and Veronica Mallick met! As first meetings go, I’d say theirs was one of the most thrilling introductions I’ve come across in a lesbian romance yet! You simply have to read it to feel that sense of shock and excitement!