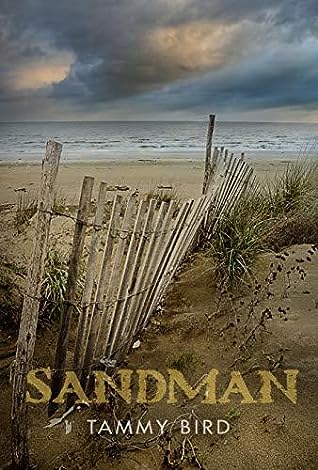 One word. Sandman. On the book cover. The text almost translucent, as if trying to hide in plain sight with its colour melding into the sandy beach with an ominous-looking sky looming above the troubled waters.

When I first heard about Tammy Bird‘s debut novel, “Sandman,” I was immediately curious. First, the cryptic title, which set my mind whirling trying to ascertain its meaning or symbolism. The aesthetically unsettling cover closed the deal for me. SOLD.

Then, the fact that the revealed plot from the blurb was twofold – a search-and-rescue effort post-hurricane and what was lurking in the sand dunes. I thought that was a fascinating approach to writing in the crime thriller genre in lesfic. Needless to say, I utterly enjoyed the story as a whole. I was glad to discover that there were more than met the eye, beyond the twofold-plotline blurb! Truth be told, I actually didn’t read the blurb before I read the book because I was so intrigued by the title that I wanted to find out for myself including what the case would entail. I must say, I was surprised when I went back to read the blurb afterwards when I saw the revelation of the title’s meaning! I wish the blurb didn’t mention that, though. Oh well, it didn’t affect me because, thank goodness, I didn’t read the blurb before delving into a book this time!

The best thing about the book for me was the extraordinarily original crime plot and its modus operandi that Bird so slyly crafted. Talk about upping the game of serial killing crime stories! Being a fan of the genre in mainstream, I can safely say that I’d never come across anything quite like this concept before! A myriad of, otherwise, known plot devices used individually in crime thrillers, forged together to make a more complex and richer plot. And the twists were cleverly weaved and executed at the most opportunistic time when I least expected it, leaving me delightfully impressed! With loads going on, Bird never ceased to ensure that the story was developed in proper stages so the reader could follow and discover revelations alongside the characters. Lastly, the setting. Small village. In a gloomy weather condition, perfect for telling a dark, sinister crime thriller. The colour and mood that Bird subjected her tale to reminded me of the crime series, “Broadchurch,” with that kind of atmosphere laden with a thick air of secrets and lies that she deftly created, which was utterly effective!!

As I mentioned, Bird crafted a refreshingly original plot, a heinous, tragic-turned-pure-delusion, psychological crime thriller. Believe me, it’s nothing you’ve ever come across. At least not in my case and I’ve read quite a bit of crime/psychological thrillers in both mainstream and lesbian fiction! It just takes a bit of creativity, outside-the-box thinking and belief, imo, instead of just resorting to the same old plot devices, only changing the setting and circumstances. Believe me, Bird had gone over and beyond in the “thinking outside the box” area of creativity when it came to devising the plot which was intricately set up, with cleverly constructed red herrings and diversions to boot, making the case even more captivating, disturbing and addictive! As if that weren’t enough, there was also this growing camaraderie amongst three women, all of whom had a pivotal role to play in the grand scheme of the story, not to mention, the kicker….Katia’s brother. Just wait until you read the book and find out!

Anyway, back to the story, without spoiling anything, let’s just say that there were some surprising parallel and convergence of what was happening in the search-and-rescue, Katia’s past, her relationship with Zahra and Paige and her family, and what was going on in the village behind closed doors. Needless to say, as I delved deeper into the story and the crimes, I was gobsmacked at the realisation when things unveiled themselves, the implications and effects of the revelations that ultimately had me questioning the psychological decay of humanity and value of life. As mentioned, this story had many layers affecting everything and everyone involved. But I’m pleased to say that Bird was aptly methodical in her approach to the process of collecting data and evidence, finding clues, uncovering and revealing the extent of the serial killer’s motives (or lack thereof!), his evil deeds, layer by layer through various avenues, i.e. forensics (CSI work, post-mortems, K-9 searches), investigations, interactions with various individuals. As a huge fan of the crime/thriller genre and a stickler for details and the process, I was gratified by Bird’s commitment to being meticulous in handling such an astonishing case with many outlets slithering along the edges, keeping everyone on-edge including the reader!

Let’s talk about the characters. Katia was the MC, really. But thankfully, the story, because of its complexities, wasn’t only presented solely from her POV. Bird also wanted to present the case from other characters’ perspectives, particularly the antagonist’s, which was very useful. Chills but totally necessary to deepen the implications of the plot and its M.O. as the story progressed. I did wish Paige and Zahra’s perspectives were more fleshed out, though. They were not as frequent as I’d have preferred, but nonetheless, I appreciated the effort. I really saw Katia, Zahra and Paige as the trio to solving this case. They all had very interesting backgrounds, so much so that I wanted to know more about Zahra and Paige than what Bird had given me. Also, Katia’s brother. I was utterly fascinated by him, his characteristics and behaviour, which I thought Bird portrayed with convincing effect. His character was one of the highlights of this richly complex story for me. Although Bird did attempt to flesh out his character through providing glimpses into his inner thoughts and mindset but I wanted more. Oh, the puzzles! You’ll know what I mean when you read the book! Simply remarkable!

Back to Katia, Zahra and Paige. I loved their chemistry together as close mates. Their interactions flowed so naturally that I believed they were indeed each other’s support system. One thing I’d like to mention is, this book is NOT a romance. Not by a long shot, which in this case, I was delighted because the crime story itself was simply too absorbingly captivating, compelling in its nature and history, with absolutely fascinating flash backs (disturbing but oh-so compulsory!), too intricate to be distracted by the romance. Although, there was a hint of it but if Bird had taken it out, I wouldn’t have missed it, tbh, especially when those three women were deeply involved with the case. No one was neglected or ignored which I really appreciated. I just love reading about a trio of women solving cases, i.e. Charlie’s Angels. But obviously, this trio was no Charlie’s Angels. Just three mates, using their professional expertise and personal intrigue to put their heads together to try to solve the case which was slowly removing the mask of the entire village revealing its harsh truths, effectively ending its sense of safety, security and serenity amongst its inhabitants and visitors alike! So back to the romance bit, whilst it was negligible, it occurred very organically giving the story a layer of softness and gentleness amidst all the darkness and the utterly ugly side of humanity! And oh, let’s not forget about the dog!! Oh, the brilliant dog!!

All in all, I absolutely loved the originality, the audacity of its twisted, creative, full-loaded crime plotline. I enjoyed this book from the beginning until the very end with all the twists and turns in all its ghastly and gruesome revelations, the deeply heartfelt relationship between Katia and her brother, and obviously the camaraderie amongst the trio, all of which I thought Bird cleverly built around and blended them together with convincing effect. I was utterly satisfied with how the case was handled from the menacing start to the edge-of-your-seat ending. Needless to say, I thoroughly had a blast riding in this dark, insidious, devastating journey of truth, reconciliation and hope for love, friendship and family.

“Sandman” is a MUST-READ. I HIGHLY recommend this book to all fans of the crime/psychological thriller genre. What a fresh approach to creating a twisted plot with various eccentricities and an M.O. that was truly original and very creative! In fact, if you ask me, this book could’ve been marketed as a mainstream crime/thriller fiction! I can’t believe this was Bird’s debut effort! Brilliantly written and told! She really nailed the intensity required of the genre. Looking forward to what she has in-store for her readers in her sophomore outing! Yup, Bird’s certainly on my list of new authors to watch! Bloody well done, Ms. Bird! Thank you for thinking outside the box with the crime/plot-weaving, keeping me engrossed ’til the very end including providing me with those lovely characters – the trio, the brother and the dog!